What is special about the NFC device (a cellphone) architecture is that besides chip and antenna (similar to any other RFID device) it also includes the Secure Element. This is a component that allows for security of NFC communication

There are three types of Secure Elements: 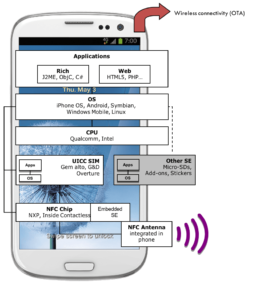 The SIM card as a Secure Element

Over the last couple of years, we have seen multiple of different attempts to make existing mobile phones NFC enabled by adding an external device with included NFC chip, antenna and Secure Element. The most successful which has been used in many pilots and trials is the microSD card. Many mobile phones today have a microSD slot and by inserting a NFC enabled microSD, there would be millions of potential NFC users. Service providers like banks has performed many tests with microSDs and one of the benefits they see is that they can be the issuer and don’t have to depend on a mobile operator.
One of the technical challenges with NFC enabled microSDs is the RF performance which is dependent on where microSd slot is placed on the phone and how the back cover is constructed. A few new NFC mobile phones support having a microSD as the Secure Element and communicate to the microSD using Secure Wire Protocol (SWP) as with the SIM card.

In the next post we will explore the NFC security a little deeper. Stay tuned!